How is the Future of Solar? 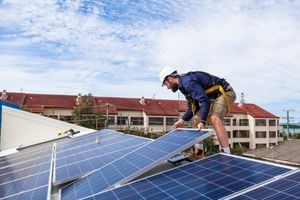 Solar energy is increasingly becoming reliable for many homes and businesses worldwide. For the last 30 years, the industry has seen steady growth, making solar panels more accessible and affordable.

But will this trajectory continue? Here we’ll explore the future of solar and what trends will likely shape the industry.

How Is The Future Of Solar?

The answer is promising. While the idea of turning sun rays into a reliable energy source for households and industries seemed far-fetched in the recent past, it is becoming increasingly feasible today. And it’s not just the industrial players that have driven the change, but everyone, including governments, businesses, and individuals.

The solar industry has seen a flurry of activity in the past few years due to government incentives, the falling cost of solar technology, and consumers’ growing environmental awareness. All this has given the adoption of Photovoltaics (PV) technology a significant boost.

The future of solar looks bright even if the US government has since reduced its incentives.

The past few years have seen a significant increase in solar energy usage.

According to energy.gov, the production of solar energy increased from 1,121 gigawatt-hours (GWh) in the year 2010 to 90,891 GWh as of 2020. This positive trend continued in 2021, giving more and more people access to solar energy.

In fact, 39% of all new electricity power added to US general consumption in 2021 was from solar energy. That’s pretty impressive!

While the electricity generated from solar energy remains low at 3% as of 2022, the trend toward increased reliance on solar is certain. Some studies suggest that those figures could go up to 90% using clean energy from wind and solar.

According to the National Renewable Energy Laboratory (NREL), it’s projected that solar energy alone could power up to 45% of the US electricity needs by 2050. It’s possible!

In the past, the cost of these photovoltaic systems was high, but this trend is quickly changing with advances in solar technology. Although the current tech is functional, the industry constantly innovates and advances to create more cost-effective and efficient ways to generate solar energy.

With the large influx of government funding, the solar industry has continuously lined up projects to reduce this technology’s overall cost. If the huge investments achieve the intended effect, you can expect the current price to be cut by half by 2030. It will make it easier for more households and businesses to harness energy from the sun.

The biggest hindrance to the widespread adoption of solar technology has been its high initial cost. Currently, most households installing a 10kW PV panel can expect to pay an average of $20,000.

In the last decade, this cost has significantly reduced. According to the SEIA (Solar Energy Industries Association), in 2010, the average price of a residential system would go for $40,000. The difference is enormous.

With continuous investment and innovation, you can only expect this cost to dip even further.

In 2021, there were over 10,000 companies in the solar industry, employing more than 255,000 Americans across all fifty states. It’s no surprise that a growing sector attracts more people interested in making a difference.

With growing demand and easy access to solar energy, the industry can expect more jobs in the coming years. The US Bureau of Labor Statistics (BLS) forecast that between 2021 and 2031, panel installation jobs will grow by 27%. Of course, other jobs related to the sector, such as sales and administration, will be available. (1)

Don’t be left out. Invest in solar energy and get ready to benefit from the cost savings, environmental benefits, and job opportunities that come with it.

At Wayne Solar, we provide quality and affordable solar products so you can take advantage of the future of solar. Contact us today for more information! We are privileged to serve Ormond Beach, Palm Coast, Daytona Beach, Port Orange, New Smyrna Beach, and Daytona Beach Shores, as well as the nearby communities.