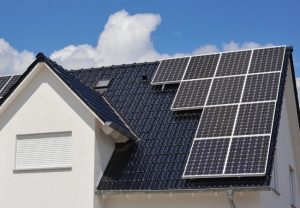 If you want to install a solar energy collection system, you may not realize that you have the choice between solar panels or solar tiles. Many people even confuse these as being the same thing but they are quite a bit different except that they both convert the sun’s rays into electricity.

What is it that makes them different? That’s a topic that will take some lengthy explaining. So, let’s get to that, so you will be better able to choose as to which ones you will use in your solar energy collection system.

The Similarities of Solar Panels and Solar Tiles

Before we get into the differences between solar panels and solar tiles, it’s best to tell you what is similar between them. Here are the main similarities:

What are Solar Tiles?

This is a much newer technology than solar panels. That is both good and bad. The reason for that is they are not time-tested to see exactly how well they work and how long they will last. What’s good about that is they have the latest versions of photovoltaic technology in them. These are installed like any other type of roof covering so they can fit on a variety of roof shapes. The only problem with that is they cannot be oriented to where they will catch the most sun as solar panels can. They do make for a much better-looking roof than those that have somewhat bulky solar panels placed on them.

The Advantages of Solar Tiles

When whether to purchase solar panels or solar tiles, you should know these benefits that solar tiles offer to you:

What are Solar Panels?

These have been the mainstays of solar energy collection systems for many decades now. During that time there have been several advances in this technology that have raised their efficiency and lowered their cost. Unlike solar tiles, they are not embedded into the roof covering material but are instead either strapped or glued on top of an existing roof covering. This allows them to be oriented in the direction where they will get the most sun but an installer also has to be careful not to put leaks in a roof when installing them.

The Advantages of Solar Panels

To know whether to purchase solar panels or solar tiles for your solar energy collection system, it will help if you learn some of the advantages that solar panels offer as opposed to solar tiles. Here are the main ones:

Now that you already know which between solar panels or solar tiles you’re getting, it’s time to look for the best company to work with. If you are located in Ormond Beach, Port Orange, New Smyrna Beach, Jacksonville, Palm Coast, and other areas in Florida, Wayne’s Solar is the trusted solar panel installer to call. We install solar PV for homes and commercial properties, solar water heaters, solar pool heaters, and more. Call us at 386-673-9720 to learn more about the services we offer and to get a free quote.